Faces of Payatas: Lyka’s Story and the Girl Effect

Some time ago a video went viral called the girl effect. It’s a cute and inspirational video demonstrating the importance of a young girl’s formative years. You can see it here:

In short, supporting and empowering a young girl is one of the most effective ways of breaking the cycle of poverty. If a young girl in a developing country is empowered and supported properly she almost always ensures her future family is stable and healthy. If she is married off young, denied education and forced to work at home instead, denied knowledge of reproductive health and other rights, then this usually means a cycle of poverty for her and her future family.

Young boys deserve much support and help as well, of course, though they tend to get more opportunities than girls. If a girl’s education is sacrificed it’s usually in order to support a brother. There’s more stigma for girls than boys.

In Payatas, one of the largest and poorest slums in the Philippines, we have observed the girl effect in many ways. And to demonstrate the effect, we’d like to share Lyka’s story. Lyka is one of the Fairplay School’s most hardworking fulltime scholars. She is determined and always takes initiative in her classes. She loves challenging herself, even if it means taking on things that intimidate her. She also loves to learn; anything related to language, culture, and traveling. She has a goal and is focused towards reaching that goal, listening intently and practicing her writing, speech, dancing, and more. She hopes to become a tour guide one day so she can travel the world, meet different people, and help her family.

Lyka came from a very difficult family background. The 8th among 9 children, she and her family had to learn how to survive with what their mother earns. Working as a paper sorter in a junk shop, their mother earns P200 a day, nowhere near enough to feed a family of 11. Wondering why poor families have so many children? It’s actually a very rational decision we talked about before here.

Living in poverty, Lyka’s education has never been a sure thing. When Lyka was in Elementary School and their family struggling with life in Payatas, they planned to migrate back to their home province. The family requested for the transfer of her school documents as part of the process. Before they moved, however, Lyka’s father suffered a stroke and the family had to channel their funds for moving to the mounting hospital bills.

So Lyka went back to her school in Payatas to enroll. The Principal said they already forwarded her records to the school in the province and they would not admit her back. As the family hadn’t identified any school to send records to this was a blatant lie. With all the frustration and anger, her mother threatened to go to the media (a notorious show for poor families to air their grievances but also known as unscrupulous). The Principal felt threatened and let Lyka into school again. Though she could attend school, teachers treated her unfairly. She lost respect for her teachers and the school.

These situations are, unfortunately, quite common in places like Payatas. Schools in slums are highly oversubscribed and often try to deter more children from enrolling. With all the problems, poor teacher training, bureaucratic nonsense, and with 60-80 children in a classroom the norm, half of all students in the Philippines will drop out of school with the dropout rate even higher in slums like Payatas (Nava, 2009). In slums, it’s much higher.

Despite everything, and in large part due to her enthusiasm for learning, Lyka bucked the odds and graduated Elementary School. She was excited to go to High School. However with her Father deteriorating from a stroke, her mother, who was working full-time as a scavenger to support the family’s basic needs, had to make the difficult choice of asking Lyka to dropout to care for their father at home. Lyka had mixed emotions. She wanted to learn and felt jealous of others going to school but also felt relieved she wouldn’t have to go to school hungry and could be away from school bullies– teachers and classmates.

Taking care of her father was very difficult for her. Her father acted like a child as a result of the stroke and demanded a lot of understanding and care. At the end of 2015, following a very difficult time, her father died. 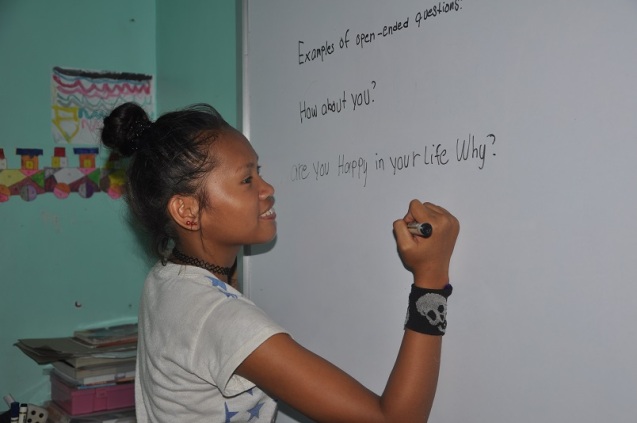 Lyka lives close to the Fairplay School and during this time her friends invited her along. She saw she could get food during school times and join the classes she was interested in. Lyka quickly fit in and took on responsibilities with the group. Her older sister, who has a mental condition, is also welcome at the School and this meant Lyka could make sure her siblings were looked after while getting an education for herself.

She became one of our full time scholars and acts as an ‘ate’ (older sister) to the group. Lyka was at our drop-in center for almost a year, however at this point the center wasn’t yet registered as an Alternative Learning Center. So with the new school year approaching Lyka’s mother informed Fairplay she was enrolling Lyka back in public school in Payatas.

So, for the third time Lyka went back to school. And soon after Lyka dropped out again. She did not learn much in school, Lyka said, as their teachers only asked them to copy notes from the board. For poor students, the teachers do not give a chance or care. She had a classmate in Grade 6 who still could not read or write. Lyka likes to ask questions for her to learn but some of her teachers did not welcome it. Like many students in Payatas, Lyka talks about teachers hitting students as a normal part of the school experience here.

During this time her mother was struggling to give her money for food, school fees, projects, and field trips. While she appreciates her mother’s sacrifice she thinks her sacrifices weren’t fair. Partly because they didn’t translate to learning. Field trips, for example, cost more than P500 plus transport and food and not much is learned on the trips. It’s an open secret here in Payatas, as in many slums, that school outings are a money-making scheme for which the students who join get higher grades in return.

So Lyka believed Fairplay could give her a better chance. Since the drop-in center became the Fairplay School, Lyka enrolled as a full-time student and has been ever-present since.

Lyka’s story has changed. Lyka is studying and learning in an environment that suits her, rather than her having to suit the environment, and she can grow at her own pace. She loves how curiosity, wonder, creativity, and critical thinking are encouraged in class. She has formed a close bond not just with her classmates but also with her teachers, because everyone is working towards helping each other. Now she is working hard to improve her English, so she can talk to any English-speaking volunteers at Fairplay too and learn towards her dream of being a tour guide and travelling the world.

Lyka hopes to graduate and find a job where she can do what she loves. She wants her mother to retire from scavenging and start her own business. She dreams of sending her brother back to school and her sister to a Special Education Class and have a personal nurse. But Lyka said she won’t forget where she came from. After she fulfills her dreams, she said, she plans to go back to Fairplay and sponsor a playground for the Kinder students.

And this is the power of the girl effect. Helping a girl during these crucial years makes a massive difference right now and is a huge investment for the future. As Lyka continues to work hard to fulfill her dreams she learns how to take care of herself and her future. She has changed the narrative of her life.

One thought on “Faces of Payatas: Meet Lyka, and the Girl Effect”